Ceridwen on Amsterdam and global warming: 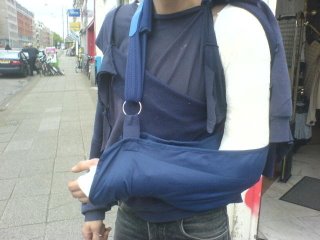 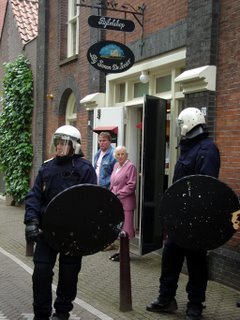 …in the Jordaan, one of the favourite tourist spots of the city. This man’s arm was broken in a squat eviction that took place there yesterday. By the time these cops get their pension the Netherlands will probably not have much longer to exist as a country. It will be under water and millions of Dutch refugees will be pouring over the border into Germany saying sorry they kept asking for their bicycles back but could they please have a house, a job and a future? By then most of northern Germany will also be under water, along with Bangladesh, New York City, much of Florida and large parts of China.I’m listening to Al Gore as I write this having just watched American scientists on TV saying that global warming caused by CO2 emissions is a certainty but American politicians are incapable of doing anything about it. The voters want to carry on driving their 4×4’s. I’ve noticed over the years how popular Jeeps and Land Rovers and Hummers have become in Amsterdam as Holland has become richer and richer. Shell is a Dutch company with a lousy human rights and environmental record. The Dutch Rabobank helps to finance the destruction of the Amazon rainforest, along with ABN Amro, ING and Fortis Bank, which is just about all the Dutch banks. So the Dutch are washing their own country down the plughole of history.European and American neocolonialism is destroying the planet. Time is running out. We have ten years to change but nobody wants to. I frankly don’t care what happens to the Dutch. They have their history of slavery and colonialism so they shall reap what they have sown. But the millions of poor people in Bangladesh, once a Dutch colony till the British moved in? I care what happens to them. They don’t deserve to be the victims of our greed. Hurricane Katrina was America’s wake up call. Did they hear it? Some did. Most are still not listening. To put all this in perspective there has been life on earth for 3.6 billion years. After 160,000 years of Homo sapiens sapiens we are already at the tipping point of extinction as a result of just 250 years of affluence that started with the industrial revolution in Britain. If you want to survive this take my advice. Don’t be under forty years old. Only a revolution in our thinking and behaviour will give us a chance of survival.Washington Post/Al Gore