Almost ten months ago I launched Spot.Us via a Knight Foundation grant
which is trying to pioneer “community funded reporting,” the act of
distributing the cost of hiring an investigative journalist. In short:
I fundraise for independent reporters but not through foundations or
grant writing. Spot.Us fundraises by making the argument to the public
that this reporting will benefit us all. If we can get 30-50 people to
donate $20 each around a specific topic – we are in business.

It’s often called “crowdfunding.”I grabbed the term (and the concept for Spot.Us) while I was the research assistant for Jeff Howe who coined the phrase “crowdsourcing.” While working on the chapter about crowdfunding I began studying Kiva.org, Donors Choose, Sell A Band
and other organizations exploring this space. In many ways Spot.Us is
my interpretation of the practices and principles they were employing
for journalism.

So what are those practices and principles? What are the concrete
lessons, mistakes, ideas I can pass along to others who might want to
join this space? In truth there are countless lessons every day. But
here are a few that stick very prominently in my mind.

Make sure all your ducks are in a row before you launch. It’s a
natural inclination to launch the fundraiser the second you have the
idea. We’ve done this on Spot.Us too many times. We always find that
when we take the time to get our messaging, goals, and deliverables in
a row first, we do much better.

A good example of this is the City Budget Watchdog
series on Spot.Us which has raised $3,785. That series was originally
called “City Budget Blues” and if you watch our quick video pitch  you’ll see remnants of that
title. It was only a week or two in that we realized our messaging was
way off. “City Budget Blues” was a bit of a downer and while very on
point wasn’t tied to the goal of the project – to be a watchdog of city
hall at a time when others weren’t acting as the watchdog.

Make sure you’ve accounted for.

From the donor perspective transparency means something else. It means you know exactly where your money goes.

The images below should make the case apparent. And NPR has even
improved recently in letting a donation be more transparent and
accountable. 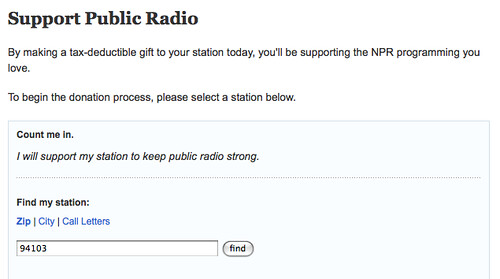 Now imagine if both of these donations were for NPR.

In one case NPR would let you donate to the organization or a
specific NPR affiliate near you. In the second case NPR would let you
donate to a specific story. You’d have a bunch to choose from
and you could pick the one that meant the most to you. Fundraising is
nothing new. People have been doing it for as long as…. well…. people.
What the Internet has allowed is a transparency and specificity in the
act of fundraising that turns a donation not just into a “good feeling”
but a statement and value judgment about who we are as individuals. It
can be fun. The best Spot.Us pitches are those that give the donor that
sense of ownership.

Deadlines and restrictions are great. No joke! Whenever possible
give yourself a deadline. It is amazing what we are capable of when put
between a hard place and a deadline. Moreover deadlines give you and
your collaborators in fundraising (the donors) something to rally
against. It’s a battle against time. One feature set I know Spot.Us
needs is a ticking clock that counts down the days left. Right now we
don’t have that – but whenever we Tweet “x days left to reach y goal”
we get a reaction. Knowing there is a time limit on something gets
people moving. It also gives us a narrative. And that leads directly
into……

In one of our more successfully fundraising examples we caught the
attention of a local blog that covered crime in Oakland. Excited about
the work we were doing they asked if they could send out an email blast
to their list of 500+ about the reporting efforts we were undertaking.
It worked out well – raising a few hundred dollars and spreading
through a few other email lists eventually propelling us to our goal
within 12 days.

What initially caught their attention?

A single Tweet I had done about a single blog post from the
reporter. The blog post was just an update about their reporting
efforts. Some might have even thought it mundane. But it gave us
something to cheer about “hey – look at this, the reporting process in
action.” Giving updates along the way, big or small, gives people
something concrete to examine.

Many people will not donate the first, second or third time they hear about a fundraising effort. According to Robert Greenwald of Brave New Films
it takes on average seven asks before somebody will become a donor.
Okay – so how can one ask seven times without sounding redundant or
annoying? Don’t make a direct ask: Just tell the story of your
progress. Be a cheerleader and that does the asking for you.

In many ways Spot.Us is always trying to tell two narratives. The
story of our pitches (the reporting) and the story of our site and the
pitches (their progress). What are some interesting aspects of telling
a story? Getting new and interesting characters. That’s where partners
and collaborations can be huge.

It’s easy to want to partner with everyone. Hey, if you can just
convince a few dozen people to join you right off the batt you’ll have
some good momentum and coalition building can get lead you to think
that everyone is a potential partner.

That isn’t the case and assuming right off the bat that your project
will be valued by other organizations is a mistake that will jump back
in your face. It certainly has for me when approaching disenfranchised
communities. Even with the best of intentions other organizations,
especially media organizations (even alternative ones), are viewed as
with suspicion. Partnering doesn’t happen at the drop of a phone call.

What should you look for in partnerships? Here are the things we’ve found we need for all partnerships.

When you do find the right partner it can go a long way. Especially
if you are able to land a big partnership. One article in the NY Times
can raise upwards of $6,000. One newspaper many checkbooks.

Another central character in the narrative of your fundraising, what
you can cheerlead about, is your growing community. These are your
heroes. “I aint too proud to beg”
was always a great quote (The Temptations). But that means you “aint
too proud to thank” everyone and anyone. No donor is too small. You’d
be amazed at what can happen when you give just a little attention to
the smallest donor. The more personable and personal you are the more
one-time donors become partners.

On occasion you might get a member of your community who will help cheerlead with you. 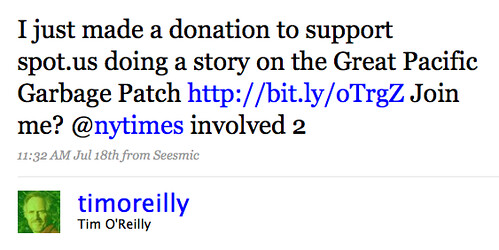 This one Tweet from Tim O’rielly brought in several hundred dollars within a matter of hours.

You don’t have to be the only cheerleader. Other people can join you
– but they’ll only show as much enthusiasm and passion as you do.
Somebody has to wrangle the project and lead by example.

Don’t confuse the medium and the message. Sure, it’s great that we
can fundraise for independent journalists on a custom built site like
Spot.Us. But we could also do it with a simple ChipIn widget. 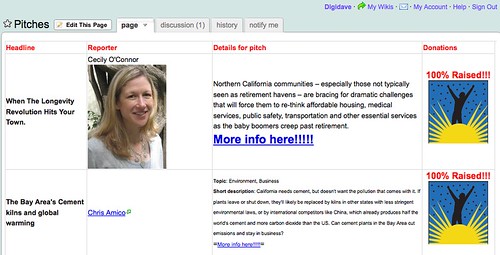 That’s right: Spot.Us started 10 months ago using JUST a wiki. It was free to setup. We used a third party site, The Point, to collect money. There are countless sites that will collect money on your behalf. Facebook Cause, Kickstarter, First Giving
and more. Rather than build an entire system yourself use whatever is
already out there. You might also check to see if there are any sites
that work around your specific niche like Donors Choose for teachers.

In summary, my lessons learned include:  a specific ask, concrete deadlines, celebrate your successes, get your community to do the cheerleading and start simply -you don’t need to do everything.

Dave Cohn is a recovering technology reporter trying to figure out the future of journalism and the founder of spot.us