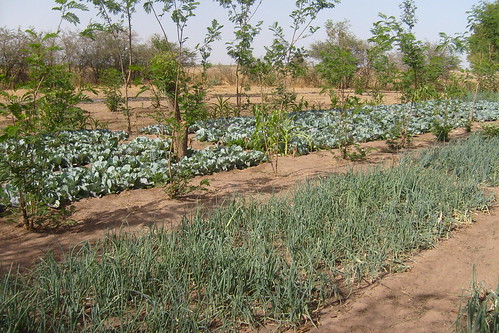 For centuries, farmers have placed trees among their crops to enhance soil health, raise marketable fruits or nuts, and protect row crops from damaging winds. Yet agroforestry, as the practice is known, is generally considered a rarity among mainstream farmers.

“This study offers convincing evidence that farms and forests are in no way mutually exclusive. Trees are in fact critical to agricultural production everywhere,” said Nobel Peace Prize laureate Wangari Maathai, founder of Kenya’s Green Belt Movement, in a statement [PDF]. Maathai was not involved in the study.

Agroforestry has long been promoted by sustainable agriculture advocates. The practice is now gaining increased attention for its potential to sequester large amounts of carbon dioxide.

Agroforestry systems are used for five main purposes: increase farm value by putting crops between trees; provide shelter for forest crops such as mushrooms and ginseng; form a buffer along streams and lakes to filter pollution and prevent erosion; provide shade for livestock on pasture lands; and protect sensitive plants and animals from wind.

“If planted systematically on farms, trees could improve the resiliency of farmers by providing them with food and income,” said Tony Simons, deputy director general of the Centre. “When crops and livestock fail, trees often withstand drought conditions and allow people to hold over until the next season.”

Previous efforts to quantify the extent of agroforestry have struggled to differentiate mixed stands of trees and crops on a global scale. This study was unique, its authors said, due to the use of advanced satellite imagery that identified populated regions with arable land. In these agricultural areas, the authors assumed that existing tree cover represented a viable agroforestry system.

While more encompassing than previous agroforestry estimates, the study has its limitations. Mainly, a satellite image does not explain what farmers are actually doing on-the-ground. “We cannot expect results for an individual pixel (1 kilometer x 1 kilometer) to be close to reality,” the report said.

Due to its uncertainties, the study provided a wide estimate. Between 17 and 46 percent of all agricultural land involves agroforestry, the report said.

The report, released at the start of this week’s World Agroforestry Congress in Kenya, comes as many agroforestry researchers and farmers are lobbying for international climate negotiators to include agroforestry in the successor agreement to the Kyoto Protocol.

Polluters in developed countries may offset their emissions by planting new trees on deforested land or in areas where trees have not naturally grown (known as reforestation and afforestation, respectively). Negotiators will decide at the climate summit in Copenhagen this December whether farmers should be compensated for practices that sequester carbon on their land, such as the use of biochar, no-till farming, and agroforestry.

“Indeed, agroforestry’s relevance to sustainable development in the 21st century has in many ways come of age in part through the lens of climate change,” said UN Environment Programme (UNEP) Executive Director Achim Steiner, in the opening speech of the World Agroforestry Congress on Monday.

UNEP estimates that 6 gigatons of carbon dioxide equivalent could be sequestered on farmland by 2030 if agricultural practices such as agroforestry were more widely adopted. In addition to absorbing carbon dioxide from the atmosphere, some trees can also capture nitrogen and therefore reduce the need for energy-intensive nitrogen fertilizer.

Some climate experts remain dubious that land use changes should be relied upon for near-term reductions in greenhouse gases. The projects sequester carbon when plants are growing, so sudden changes, such as a fire or deforestation, would cause the project to release the carbon stored within the plants and soil. Meanwhile, the polluter who financed the offset project continues to release emissions.

Agroforestry may also not be the most cost-effective use of carbon funds. Reforestation, improved logging, and fire prevention projects may sequester more greenhouse gases at a cheaper cost, said Jack Putz, a University of Florida forest ecologist.

“It’s hard to say it’s a bad option for sequestering carbon because of the ancillary benefits. That said, an agroforest is not a forest in the sense of biological diversity,” Putz said. “Keeping forests as intact as possible is a very cost-effective way of sequestering carbon.”

In preparation for incoming carbon funds for agroforestry, the World Agroforestry Centre and UNEP are developing a standard method for measuring carbon sequestration across all landscape types.

“I suspect [agroforestry] is where a lot of the funding is going to go,” Putz said.

Read more about this in the Worldchanging archives:
Trees: The Anti-Desert
Agricultural Sustainability = Agricultural Productivity