Increasing the number of bikes on the road is becoming a serious goal for forward-thinking leaders. As Elisabeth Rosenthal recently wrote in the New York Times, there will soon be only two kinds of city leaders: those who are implementing bike amenities and bike-sharing programs, and those who plan to do so soon. But it’s about more than just announcing a mission, or even making bikes available for free. A lack of bike infrastructure plagues many cities, causing would-be cyclists to shy away from congested, potentially dangerous roads. City leaders are finding that adding bike amenities, such as sharrows, separate lanes and on-street bike parking to the streetscape works well to encourage residents to use their pedal power.

Read on to find out what some of these infrastructure improvements are, how they work, and what they mean for cyclists and drivers alike.

Separate Bike Amenities
It’s about time we recognized bicycling as a legitimate mode of transportation with dedicated bike lanes and parking. Bicyclists are hit by car drivers far too often in our cities, and local governments are starting to do something about it. In Copenhagen, for example, grade-separated bike paths make cycling safer, and in Portland, Ore., painted paths and other road coloring treatments keep cyclists visible. Scroll down to check out a variety of some of the best innovations cities are implementing to help people share the road:

Street parking for bicyclists is surprisingly controversial, even though parking is a basic and essential part of personal transportation infrastructure. By giving over parking spaces traditionally reserved for one car or motorcycle, cities can provide places to park up to eight bikes. Transforming these 9′ by 18′ rectangules of urban real estate into bike parking does more than just make it easier to ride, it sends a visual message about the type of change we want to see.

Sometimes letting motorists know to expect cyclists on the road can be a big step toward encouraging safer driving. A 2004 study done in San Francisco revealed that the sharrow – a painted symbol indicating a shared roadway – is an effective way to shift motorists’ (as well as cyclists’) positing in the streets as to help create a safer, friendlier way to roll. Have you seen these pop up in your neighborhood?

Otherwise known as “advanced stop lines,” bike boxes work under a simple concept: provide a colored “box” at the front of intersections where cyclists can wait at a red light. Cars sit behind this line, and are often times required by law to not make a right hand turn on red. These brightly colored boxes succeed in raising awareness of cyclists, and also help to eliminate potential conflicts that may arise at intersections. Read more about the bike boxes in Portland.

On a similar note, bike lanes themselves are going green — literally. Whether an entire lane is painted, or sections leading into intersections, a brightly colored patch of “green-crete” serves as a reminder to automobile drivers that a cyclist may be right alongside them.

Create Your Own Bike Lane

When your route has no sharrows, bike boxes or green lanes, LightLane can help you keep your personal space at night. With two lines of lasers projected onto the pavement just behind your bike, LightLane both makes cyclists more visible to cars, but also gives drivers a guide showing how close is too close. Finally in production, LightLane may be a lifesaver for those late nights at work and long rides home on unmarked roads. (We’re still waiting for someone to invent the DIY chalk route!)

In Copenhagen, bicycle “superhighways” run right alongside major auto-packed roads, giving commuters a healthier, safer alternative way to access the city. Worldwide, places such as Montreal, Bogota and London have long embraced and provided these lanes. As you can see from the video above, separate lanes not only increase cyclist safety, but also encourage more “reluctant cyclists” to hit the streets. 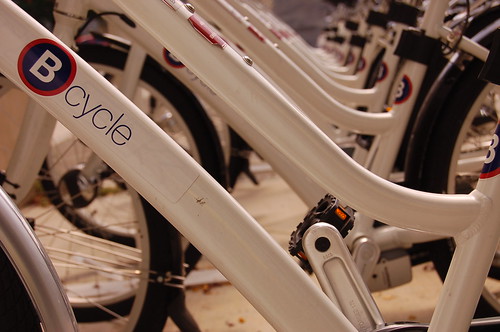 A community oriented and civilized system, bike sharing actually originated within a Dutch anarchist movement, the Provos, who painted 50 bikes white and left them for free use around Amsterdam (all 50 were stolen, and their plan to close downtown to all traffic and encourage the government to buy 200,000 white bikes fell flat). Bike sharing has taken a turn for the better since then, and bike sharing programs are wildly successful across Europe and the Americas — Paris’ Velib system has become the most iconic worldwide, but other cities have added their own: SmartBike in Washington, D.C., BIXI in Montreal, Samba in Rio de Janiero and b’easy in Santiago. Bike storage stations are placed in transit areas around cities, and for deposits, fees, or even for free, cycles can be checked out and returned for short jaunts or long treks. From the popular zip-car-esque membership community bike system to “bike libraries” where you can check out a bike for long periods of time for free, people are realizing that it is more convenient to share their wheels.

Bike Storage
Ever ride your bike up to a public bike rack that can only be easily locked to your quick-release front wheel or easy-to-remove back wheel? Seems cyclists could use a few more options. Here are a few public bike storage innovations that we think U-lock and chain lock users alike may find a little more user friendly:

Giken’s ECO-Cycle is an underground, automated parking kiosk, currently in use in Tokyo. The kiosk can lock and retrieve bikes in seconds and some installations can hold up to 9,400 bikes. See the short video to see how it works. Also see a more detailed article about the ECO-Cycle here.

Penny Farthings’ Green Pod is a great solution for building owners who want to help bikers commute to work. A single parking space can be converted into solar powered showers, lockers, changing rooms and up to 10 bike storage spots. One thought: since garage owners might hesitate to encourage non-car forms of commuting, this might be a good opportunity for a local government incentive aimed at garage operators, developers or employers. 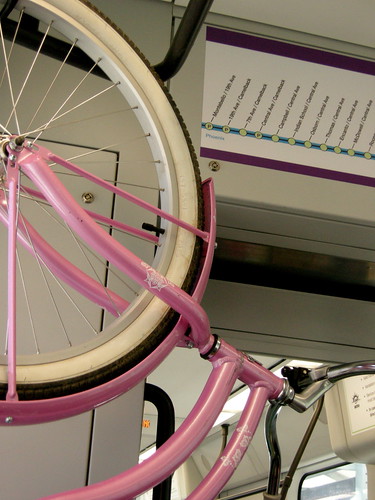 By incorporating bicycle-friendly designs within public transportation systems, cities can encourage more people to decide to beat the traffic by jumping on the light rail with their bike in tow.

By combining the best of our transit options we can be multi-modal and super-connected. Just imagine every bit of your trip to work or school being bike friendly: you bike to the light rail or bus stop nearest your house, zip downtown on public transportation, hop off and pedal the rest of the way. And maybe we even go so far as to ensure that every taxi cab has a bike rack, too!

This piece was written by Sean Conroe, Sarah Kuck and Kamal Patel

(Posted by WorldChanging Team in Features at 5:20 PM)