“Latinamerica is particularly well equipped for these changes (peer production) by their cultural affinity with the values of P2P”, said Michel Bauwens on an interview for Pagina/12 the Argentinian journal. This statement seems to prove itself when one reads Elyssa Pachico;s article “Rural revolution in Colombia goes digital” (first published by CounterPunch, you can find it also at her site).

In poor rural Colombia, where phone lines, drinkable water and decent roads can be hard to find and where the violence that the country has faced for the last decades is tangible, a free and basic infrastructure of “Telecentros” that allows connection to the Internet has been built by the State and embraced by the communities. The Communications Ministry has been building this infrastructure for web connectivity over the past few years and by doing so, the State is embracing a new role in giving communities new means of autonomous production and participation (using Bauwens’ words in the same interview). Indeed, the latest incidents in some indigenous communities with armed actors (guerrilla, army and paramilitaries) mentioned in Pachico´s article provide evidence of the communities’ awareness of the power of the web as a tool for political organizations and citizen participation.

It is interesting to find out that the landscape her article presents is not the hightly interactive Internet we might be used to; it is the basic communication and dissemination tools (email, facebook and discussion lists) that can have a huge impact on their political situation giving social networks another dimension where citizen journalism is an important approach. According to Vilma Almendra, a web producer for indigenous organizations in Cauca interviewed by Pachico, for this communities “It’s not a question of Internet coming in and transforming us, It’s a question of us taking these technologies designed for a globalized, consumerist world and turning them into a tool that’s useful for our needs.” 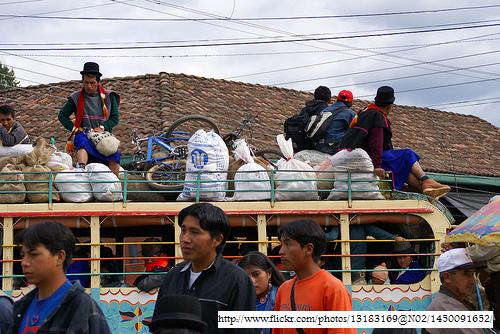 Additionally, considering that connectivity is low for individuals in these communities, the traditional communication tools like radio and sound systems in public transportation are also having their own share of success. “Activists also record radio shows discussing local and international news compiled from the Internet, burn the radio programs to CDs, then distribute the disks to local bus drivers… On eight-hour chiva rides previously dominated by static-filled salsa music, passengers now listen to CD recordings recounting the recent bloody protests in Peru, water privatization battles in Mexico, illegal mining contracts in Guatemala, Evo Morales’ hunger strike – information collected online in the telecentres then disseminated throughout the region…”

I would like to end by posing the question that comes to me after reading and reflecting on Pachico’s piece: how can we read this landscape change and it’s potential improvement if we consider the increasing access to cellular phones in Colombia? This is particularly important since we know that this situation is also providing lower, more competitive fees for Internet access through mobile devices.

My feeling is that cellular phones are currently playing an important role on connecting rural people and their interests with the outside, that this importance is yet to be determined (according to a rescent report by Telefonica and Navarra university about 80% of teens have access to a mobile phone in the region) and that probably once web connection via mobile becomes widelly accesible tools that allow people to follow, spread and feed discussion lists and social networks will improve the potential communication that Pachico is currrently talking about providing real time, non jerarquical source data. Definetely this is something worth thinking of.