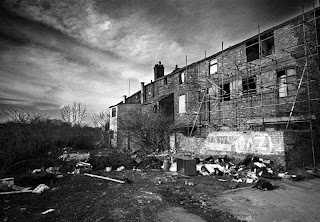 This funny thing used to happen when my friend Todd and I discussed peak oil and energy descent back when we were just coming to grips with all of that. One of us would begin to explain a particular future scenario or perhaps a strategy to address that scenario. All of these conversations could be loosely described as plans to addresses to collapse of modern civilization. We were both a little more Doomer than we are today but even back then we recognized that “collapse” wouldn’t necessarily mean an overnight, madmax scenario complete with bunkers guarded by automatic weapons and the ubiquitous zombies coming to steal stockpiled spam. We felt there was a good chance things might get really bad, especially if the collapse was swift, but that “collapse” could mean many things.

At the beginning of these conversations we would usually have to define the situation, the extent to which the world and our lives had changed as a consequence of energy descent. For instance if Todd mentioned that he’d spent $600 stockpiling food over the weekend that would fall into the immediate collapse category in terms of response. If he wanted to have a conversation about integrating agriculture into community master planning (at the time we were working together as land planners) then I knew Todd was thinking about a collapse of the current paradigm of reckless land use planning not the sudden collapse of the western world.

Dmitri Orlov, author of _Reinventing Collapse_ wrote an excellent post some time back about the 5 stages of collapse. He defines them this way.

Stage 1: Financial collapse. Faith in “business as usual” is lost. The future is no longer assumed resemble the past in any way that allows risk to be assessed and financial assets to be guaranteed. Financial institutions become insolvent; savings are wiped out, and access to capital is lost.

Stage 2: Commercial collapse. Faith that “the market shall provide” is lost. Money is devalued and/or becomes scarce, commodities are hoarded, import and retail chains break down, and widespread shortages of survival necessities become the norm.

Stage 3: Political collapse. Faith that “the government will take care of you” is lost. As official attempts to mitigate widespread loss of access to commercial sources of survival necessities fail to make a difference, the political establishment loses legitimacy and relevance.

Stage 4: Social collapse. Faith that “your people will take care of you” is lost, as local social institutions, be they charities or other groups that rush in to fill the power vacuum run out of resources or fail through internal conflict.

Stage 5: Cultural collapse. Faith in the goodness of humanity is lost. People lose their capacity for “kindness, generosity, consideration, affection, honesty, hospitality, compassion, charity” (Turnbull, The Mountain People). Families disband and compete as individuals for scarce resources. The new motto becomes “May you die today so that I die tomorrow” (Solzhenitsyn, The Gulag Archipelago). There may even be some cannibalism.

Neither Orlov nor I believe that all 5 stages are inevitable. He says,

“Although many people imagine collapse to be a sort of elevator that goes to the sub-basement (our Stage 5) no matter which button you push, no such automatic mechanism can be discerned. Rather, driving us all to Stage 5 will require that a concerted effort be made at each of the intervening stages.”

This is important because I don’t want to give the perception that we’re all in a hand basket and headed for hell regardless of what we do. I certainly don’t believe that’s the case. But I think it’s important to recognize that because collapse is likely to play out over decades not within weeks, we need a temporal framework within which to consider our plans and actions and does so in the context of resource availability.

For instance, before or during the financial collapse might be a good time to insulate your home or at least work hard on that goal and you can postpone hoarding all that spam until you get that done. 😉 Learning a new skill is almost always useful but should you develop a local currency and open your own bank or take up blacksmithing? Both might be more useful depending on what collapse looks like in your future.

And it’s likely that there will be regional differences in terms of how collapse unfolds. We already experience regional differences that might make blacksmithing a more reasonable skill to pursue even today. Or there might already be a local currency in your area making that a project you need not start from scratch. It’s almost certain that financial collapse will affect some areas more severely than others. It’s important to consider how this timeline will vary based on where you live.

I’ve had several recent conversations with people who are trying to response to energy descent, climate change and resource depletion (and their financial repercussions) by adapting in place. The task can seem overwhelming. Trying to figure out what needs to be done and when- do I reinsulated the house now or use that time and money to jumpstart my gardening efforts. I find it helps to consider a timeline that thinks about how resources might be available in the future. It goes something like this.

[By the way I’m hoping Sharon can come up with less dorky names for my stages.]

Stage
1. Business as usual. Resources are available in roughly the same way they were at the turn of the century. Cheap electronic gadgets and pet food are purchasable at Wal-Mart. Food is still plentiful (even if the cost is putting it out of reach for more Americans) and electricity is still less than $0.20 per kilowatt hour. Gasoline is less than $4.00 per gallon. Home heating and cooling and cooking costs are not prohibitive for most.

Stage 2. Life gets expensive. Resources rise in price to the point that many more Americans cannot afford to keep a steady stream of consumer goods coming into their households. (The death of a cell phone for instance might mean looking for that old one buried in the junk drawer or buying a used one on Craig’s List or even going without) Food rises in price to the point that more American have gardens (at least small ones) than not. Some items like pineapples become unavailable or a luxury for the rich. Electricity doubles in price forcing those who can afford it to invest in renewables and others to start turning things off. At $5 or $6 per gallon, gas prices force less transportation of everything and everyone. Thermostats go down in the winter and up in the summer and people start plugging in lots of space heaters and window units.

Stage 3. Intermittent Service Disruptions. Some resources become unavailable through the regular channels- Wal-Mart runs out of calculators and pet food several times a month. Food becomes even more expensive and the diet of most Americans begins to change out of necessity. Chocolate and oranges show up as Christmas gifts not as everyday treats. Communities get serious about farming resources (or they don’t). Regional outages of electricity mean that it is not available 24/7 everyday of the year throughout the US. Water and natural gas outages occur as well. Gasoline at $10 a gallon means much less travel and serious relocalization efforts. Few new cars are built. Home heating and cooling throughout an entire house is no longer the norm in every household. Black markets get established for many more resources.

Stage 4. Resource Scarcity. Many resources aren’t available to most people especially those that come from far away. A serious salvage economy develops. Food production is largely local with regional support. Self provisioning becomes a must for most households. Food returns to the center of culture and community. Electricity is generated through home or community efforts if at all. Travel by car becomes a luxury of very few people because of the cost of fuel, with roadways degrading badly. Walking and biking become the norm (potentially rail services as well as horses are used again). Winters are cold and home heating is accomplished in large part by burning wood (sustainably?). Home cooling means taking off your shoes and cooking outside on the porch in the summer. Entirely new systems of trade are established.

I want to stress that I’m not suggesting a linear progression from top to bottom. Space aliens could arrive with cold fusion technology tomorrow or we could find ourselves in Stage 3 next Sunday. Or it could be argued that we experienced Stage 3 in a way here in the Southeast as we were without gasoline- actual empty pumps- after Hurricane Gustav ripped into us last year. It was temporary but it was a service disruption. I think using the mental framework of these categories is useful as a way to make plans in accordance to resource availability.