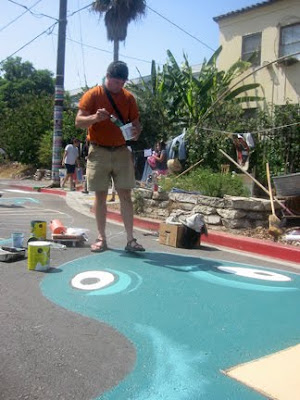 Portland architect and activist Mark Lakeman, founder of the City Repair movement, is in Los Angeles for a week of lectures and activities. Lakeman believes in actions that correct what he believes is our disassociation from nature and our alienation from each other. He’s a passionate opponent of the grid, the imposition of street networks and regimented thinking that he traces back to Roman imperialism. He’s probably most famous for inspiring groups of like-minded neighbors in Portland to adorn their streets with furniture and elaborate murals, usually done without asking for permission (see examples on an interactive map). He wants to empower us all as “villagers”, in charge of our own collective fate, rather than as serfs subservient to distant bureaucrats and moneyed interests. 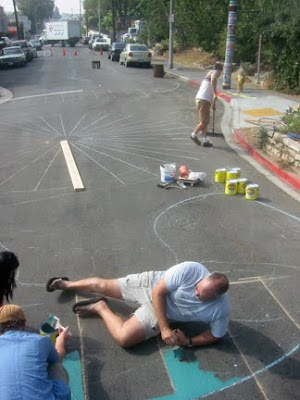 What I like about Mark Lakeman’s actions is that they aren’t “actions.” There is none of the attention seeking, pseudo-revolutionary rhetoric that one finds in activities such as “guerrilla” gardening (or perhaps some of our own past activities!). Instead the focus is on problem solving through getting neighborhoods together and doing things rather than standing around and complaining. Yesterday I had the great privilege of participating in a city repair street mural painting with my friends at the Los Angeles Ecovillage and their neighbors. The Ecovillage folks who organized the event had knocked on doors and enlisted the help of their neighbors. They blocked off the street themselves without getting a permit, set up refreshments, put on some festive music and laid out a mural design in the intersection in front of the apartments that house the Ecovillage. Whole families came and the kids had a great time participating in what became a giant coloring book. At the conclusion of a day of painting under the bright LA sun, a piñata was hoisted, bashed apart and candy rained down across the colorful new street mural. 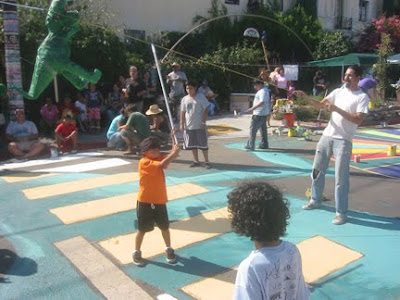 The mural incorporates lizard and ocean motifs, and enhances the crosswalks in the intersection, which is adjacent to a public school. The mural will act as a traffic calming device and counter our Department of Transpiration’s usual ignorance of pedestrian safety. While not asking for city permission is provocative, this was not a Boston Tea Party moment. It was simple problem solving in the form of a neighborhood party. Everyone had fun, and the street will be safer and more attractive. Thinking about the day yesterday, I woke up this morning with an overwhelming sense of happiness and empowerment. 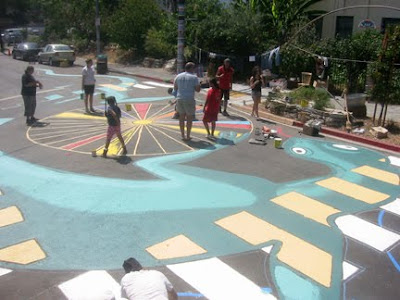 The new mural nearing completion in the early afternoon.

Can every neighborhood rush out and paint a street mural? Probably not. At Lakeman’s lecture on Friday, I could sense a familiar skepticism in the audience. He showed slide after slide of happy Portlanders creating cob benches, tea houses and street mandalas. The people of Portland have built one of the most livable and desirable communities in the US. But here in Los Angeles we have many obstacles and far less cohesiveness. And I was not alone in wincing at the aesthetics of many of the Portland projects. Lakeman himself acknowledged that a lot of people ask him why everything has to look like hippies built it. Here in Los Angeles and elsewhere we’re going to have to devise different city repair strategies and aesthetics. It’s easy to get hung up on street murals and cob benches. Like Lakeman says, we’ve got to look to nature and at each other to devise the form of our cities. The form these villager led interventions take in Los Angeles, Austin, Iowa City and Brooklyn are going to be different. What all our cities share in common is the need to get started immediately to undo a century’s worth of bad planning and disempowerment.