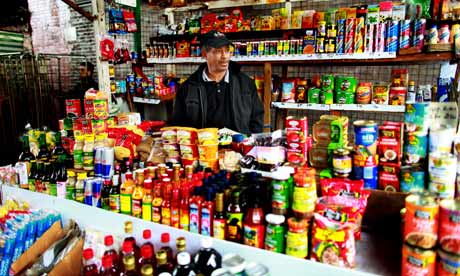 A Brixton market stallholder . . . ‘It’s Monopoly money,’ says one. ‘I won’t be having anything to do with it’. Photograph: Graeme Robertson

The canny among you will have spotted that they are all one-time residents of Brixton in south London – but the more astute answer is that they have also all been in the running to appear on one of Brixton’s new bank notes, a local currency that is officially launched tomorrow night at Lambeth town hall. The results of an online poll to determine the most popular local celebrities will be revealed at the event, as will the designs of the £1, £5, £10 and £20 Brixton notes. Notaphilists – or bank note collectors – are said to be breathless with excitement.

The Brixton pound is the latest local currency to be launched under the umbrella of the Transition Town Network, a rapidly growing global movement that urges local communities to “respond to the challenges, and opportunities, of peak oil and climate change”. The movement – essentially a rebranding of the 1970s permaculture philosophy of self-sufficiency, sustainability and working with nature – began in Kinsale, County Cork, in 2005 and has since spread across the planet from the US and New Zealand through to Chile and Italy. Even Ambridge in Radio 4’s The Archers signed up last year.

The aim in Brixton is to “support local businesses and encourage trade and production,” says the team of volunteers who have spent the last year preparing for the Brixton pound’s introduction into the local economy. “It’s a complementary currency working alongside, not replacing, pounds sterling, for use by independent local shops and traders.”

By nurturing this highly visible sense of localism and civic pride, the organisers hope to show that self-reliant communities can not only thrive, but be better prepared for looming environmental threats and the resulting social stresses. It’s one thing, though, launching such a currency in well-to-do market towns such as Totnes in Devon, Lewes in East Sussex and, just last weekend, Stroud in Gloucestershire; quite another to try such a bold measure in the heart of one of the world’s largest and most diverse urban environments.

Where do local boundaries and identities begin and end in London, if they truly exist at all? And how do you convince the myriad communities and ethnicities to (literally) buy into the idea of a local currency, let alone much loftier ambitions connected to peak oil and climate change?

Tim Nichols, the Brixton pound project manager, moved to the area a year ago after completing a masters degree in Sweden focused on climate change adaptation. He’s had to do some adapting of his own, admitting that as a “white, middle-class guy”, he has found it challenging approaching some of the local businesses to sell the idea of the Brixton pound.

“You have to establish trust with the community,” Nichols says. “It is crucial we engage all ethnicities and social classes; we don’t want it to be ‘us and them’. But the currency is a good way to introduce the concept of Transition Towns to a community. It’s something concrete for people to understand – a bit like being part of a secret club.”

Is it about strengthening community bonds and boosting the local economy, though, or spreading the environmental message? Both, says Nichols. “We want to hit home the idea of localism, which is at the heart of the Transition Towns idea. All the other ideas and issues should come naturally after this.”

Convincing Brixton’s community of shopkeepers and stall holders in the market – arguably, the very thing that has given Brixton such a strong identity – hasn’t always been easy. “We’ve worked really hard to get the market stall holders on board; they are our frontline. One of our early supporters told us that Jamaicans are naturally sceptical, so we’ve worked really hard trying to convince them about the merits of the Brixton pound, visiting some businesses up to four times. Now the likes of Blacker Dread Records, a well-known music shop on Coldharbour Lane, have signed up, and that’s been important to us as the owner is very influential in the local community. We haven’t reached the hair salons yet, though. There seems to be one salon for every two people in Brixton, so reaching that tipping point is crucial.

“One of the main concerns shopkeepers have had is that they will end up with lots of surplus notes. So we have arranged for two exchange points in Brixton, one of which will be in Morley’s [the family-owned department store]. Lewes and Totnes have also given us advice to pass on to businesses about the impact on ledgers and accounting. ‘Don’t run out of cash’ is their biggest tip. In an ideal world, we would like to see people paid, in part at least, in Brixton pounds.”

An obvious question that arises, not just in Brixton but any community introducing its own local currency, is the issue of crime: what’s to stop counterfeiters scuppering the whole scheme? Transition Towns Brixton has spent £2,000 designing and printing the bank notes, which will be available in £1, £5, £10 and £20 denominations. Much of this sum has been paid for by supporting businesses and organisations such as Lambeth Council and Morley’s in Brixton High Street. They will be compensated by having their names on some of the notes.

“We’ve invested in high-security paper,” Nichols says. “Our notes are as safe as the Bank of England’s; the notes have holograms and foil strips. And we’ve printed lots of £1 and £5 notes, as we want the currency to be as liquid as possible to help deter crime.”

‘Notes have already been offered to collectors on eBay’

In addition to the threat of crime, Totnes and Lewes have also reported problems with “leakage” with their local currency, whereby souvenir hunters keep hold of the money. “Notes have been offered to collectors on eBay,” says Nichols. “To try and avert this, we’ve already designed a collectors’ pack of the notes to please that market.”

The idea of the Brixton pound resonates far beyond Electric Avenue, Atlantic Road and Brixton Hill, and will be closely watched by all those interested in improving the way that inner-city communities co-exist.

“You are always searching for the ties that bind people together,” says Harris Beider, a professor at the Institute of Community Cohesion in Coventry and former adviser to the prime minister’s social exclusion unit. “It is important to build the economic base and social capital of any community. If the Brixton pound can aid integration, that would obviously be a good thing. And if it can achieve the local multiplier effect [the number of times money is circulated within a community] that would be good, too.”

But Beider has his concerns. “The organisers need to demonstrate to the different communities in Brixton how it will aid social interaction. The black community can sometimes sense a missionary zeal from white communities with initiatives like this. Will Caribbean cafes such as the legendary Negril on Brixton Hill be involved? [The Brixton Pound Facebook page says it is.]

“Brixton pounds could be a catalyst for both interaction and exclusion. Wi
ll it be seen by the black community as white, middle-class liberals doing their stuff? It could act as a wedge between the communities if not done right. Community cohesion is about creating shared spaces and values . The Brixton pounds scheme will need the black community to buy into it, or else it will be seen as a white pursuit.”

The view from Brixton market by Jon Henley

Brixton Wholefoods on Atlantic Road is, on the face of it, the kind of place you’d expect to be backing the Brixton pound all the way. It sells (as the name might suggest) wholefoods, exotic spices, responsibly-sourced candles, organic fruit and veg, fairly-traded aromatherapy oils, 100% natural toothpaste, eco-friendly soap – the lot. And its window is a de facto noticeboard for the local right-on, filled to overflowing with postcards advertising alternative therapy classes and posters for the Green party.

So it comes as a shock to hear the man (bearded, obviously) behind the counter dismiss the whole scheme as pointless, parochial and – most damning of all – twee. “I don’t see the point of it, except perhaps as a bit of a marketing gimmick,” says Tony Benest. “I don’t like the way it promises to make a difference to Brixton. And I really don’t like the way the organisers are telling retailers it’ll be good for business, and customers they’ll be getting a nice discount. How’s that going to work, exactly?”

Further up the road at O Talho, the Portuguese butcher’s and delicatessen, Manuel Fernandes reckons the scheme “sounds like a nice idea, keep the money in the community. But when you think about it, it gets complicated. Too confusing. My customers come from all over, even far outside London. What’s in it for them?”

Behind the counter at Marsh’s the fishmongers, the man wouldn’t give his name but would say it was “hard enough to get proper money going through the till these days, let alone fake”. And behind his stall in the market, Stephen Victor, a Brixton trader for 20 years, reckons it’s “just not realistic”.

What purpose, Victor demands, will the Brixton pound really serve? “Time was, 15 or 20 years ago, people came to Brixton because they couldn’t get what they wanted anywhere else. They had to come here. Now you can get what you need to cook West Indian in any supermarket – and people don’t come to Brixton any more. This place needs some real regeneration, some real money spending on it, not its own currency.”

Victor’s view is echoed all over the market: “It’s Monopoly money,” says a man who gives his name as Wazobia. “I won’t be having nothing to do with it.” He gestures at his display: yams, plantains, sweet potatoes. “How do I pay my suppliers with money you can only spend in Brixton? There’s nothing in it for me, man.”

The scheme’s backers admit thatBrixton’s market stall holders are likely to be the last to be convinced of its virtues. “Theirs is such a cash-based business,” says Maynard Eziashi, manager of the The Lounge bar and eaterie, which has signed up to be one of the first businesses to accept the new notes. “But I’ll certainly try and pay my suppliers on the market in Brixton pounds. It’s got to be a good idea to encourage people to shop locally, keep that money here in Brixton. It’s not like we’re refusing sterling. And if anything, people from outside who have Brixton pounds are more likely to come back and spend them!”

For Karen Salandy, acting manager of the Diverse gift shop and gallery, “It’ll show the local community we really rely on them spending their money with us. It’s a great idea; we’re going to be taking Brixton pounds, no question.” It may also, she hopes, “bring more quality shops into Brixton. There really aren’t enough at the moment. Morley’s is on board, and that’s a really good start.”

Back at Brixton Wholefoods, though, Benest reckons Morley’s is only on board “because their competition is in the West End. For them, it makes a kind of sense. But these schemes were designed for small, rural communities which actually produce things. No one produces anything in Brixton. We’re in a multi-cultural, multiracial world. This is a green shop, but people want to be able to buy Brazilian juice; that’s just the way it is. And if it’s cheaper at the supermarket, that’s where people will go.”

The Brixton pound, he reckons, “is a bit parochial. A bit twee. Overtones of the League of Gentlemen, you know? ‘Don’t shop anywhere else, for that way dragons lie.’ It won’t make a serious difference to anyone or anything. Just more work for my staff – who aren’t in the least interested in being paid in it.”

This piece originally appeared in The Guardian.

(Posted by WorldChanging Team in Stuff at 11:25 AM)